Designing a Hat for a Millinery Competition
May 21, 2021 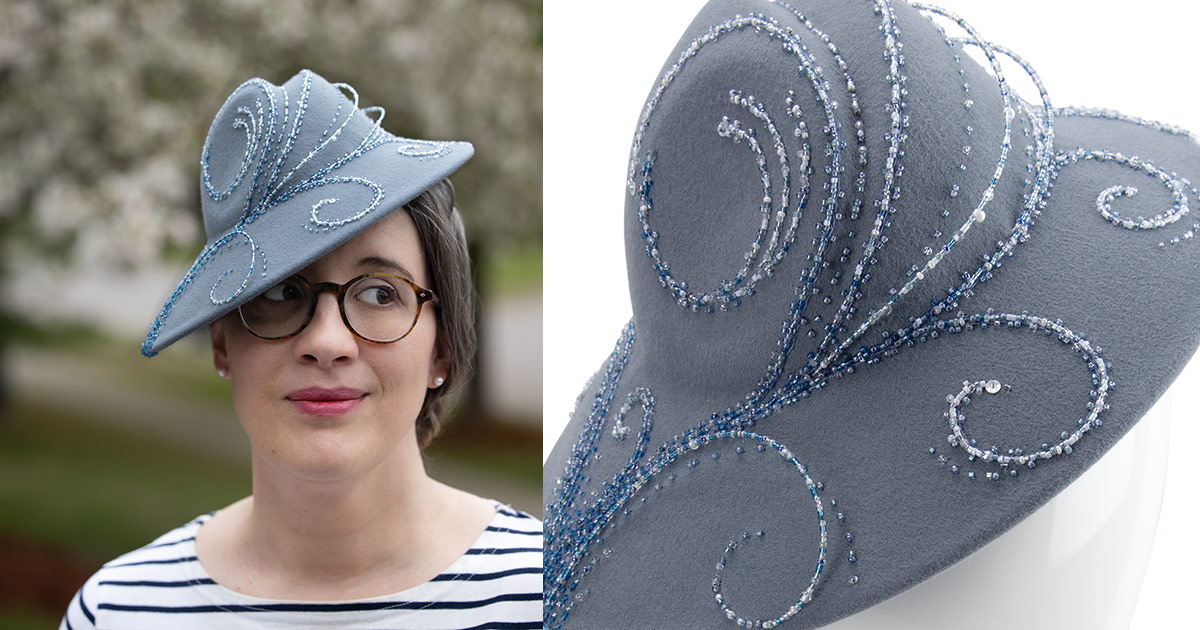 With few people wearing hats, probably even fewer people know that hat contests are a thing! From “fashions on the field” contests to straight-up hat-making competitions, milliners get to vie for accolades and prizes. Every year, HATalk Magazine (an e-magazine) sponsors a millinery competition, which is one of the best.

And I’ve never entered. Until this year. (Note: You can currently vote for me in the public prize portion by clicking the heart under the photos at the link.)

Each year a theme is announced, which gives milliners a chance to design and created a spectacular piece. Previously, I’ve lacked the time and/or the inspiration. A hat doesn’t necessarily have to be fancy or elaborate to win — but it has to be special in some kind of way. I take immense pride in the polished finishing of all my hats, but my typical hats don’t feel contest worthy to me, no matter how well-done.

One of my biggest sources of creative inspiration is the ocean — specifically the blue-gray of the north Atlantic as it crashes against rocky coastlines. So I set about to create a hat to “look like” the ocean.

What makes me feel excited? What do I love to make? What am I good at doing?

Above all, I wanted my piece to be true to myself and my aesthetic. Trying to guess what might win or impress others can be a disaster. If you guess wrong, you end up with a hat you don’t like and without prizes or honors.

Because felt is my métier, I wanted to work with that. Of my other favorite techniques — embroidery, bead embroidery and ribbon cockades — bead embroidery was my choice to take to the next level.

I am massively in love with my finished piece. It expresses me as an artist. It is a true fulfillment of my artistic vision as a milliner.

The Process of Making an Elaborate, Couture Hat

I’m kicking myself for not tracking the time I spent working on this hat. It took a loooong time. All the beading and embroidery took — naturally — longer than I initially expected.

I blocked the shape of the hat over the “Mini Matterhorn” block from Hat Blocks Australia. Other milliners will recognize that this is a tricky shape to block with a vintage cone — but creating the main shape was the quick and easy part, comparitively.

I used embroidery thread to “sketch” the main swirls. And then came the beading. So much beading! It’s fun and relaxing, but it takes a long while … especially if you’re choosing each bead individually to create a certain color effect. I wanted an ombre with the start of the waves darker and the light beads as the white caps of the waves.

The shape I chose also has a wave-like quality, which I emphasized with the beading.

In addition to the beading on the surface of the felt, I wanted to add more dimension and negative space (think of the inner curl of a wave or the splash above the water), so I used wires to suspend beading out from the hat (two on the crown and one more subtle one on the brim).

Lining the hat was a must! There’s no photo evidence of the underside, but it is a mass of threads and wire ends. Have to cover that up for a neat finish. I blocked fabric for the crown, so that the cut and angle of the crown shape is still visible from the underside. And I purposely designed the under-brim fabric to be loose and gathered to be a further “ocean-y” looking element.

The Competition Theme and Rules

Past years have featured more abstract themes, such as “Fusion” or “Equilibrium.” This year’s theme was “Out of the Archives,” which meant milliners were to take inspiration from a project or article in a past issue of HATalk.

Some chose a literal take on the assignment: “I used the techniques in [specific tutorial] to create my hat.”

Others were more vague, even as abstract as drawing inspiration from the colors of a cover image or an article about a milliner who made beautiful hats “inspired” the competing milliner to also make … a beautiful hat.

I’m not sure how much the adherence to the theme is taken into account by the judges. I think as long as a case can be made, then the entries are good. For my part, I used a blocked lining tutorial as my connection to the theme and blocked the lining for my crown.

A team of three judges will rank the top four entries. Aside from that, there is a public vote winner as well. Please vote for my piece by clicking the heart below the photos at the link. (Voting is open through June 2 only. No email address required, and no need to vote on multiple days.)

We were also encouraged to photograph the hat on a real person — to give the judges a sense of fit, balance, etc.

That meant I had to step out of my comfort zone and be my own model.

I’ve competed in only a few other contests before. Like anything else subjective, sometimes we agree with the results and sometimes not.

The winner of the HATalk competition in 2019 was my favorite entry that year, so it was gratifying to feel like my taste was validated by the judges and to feel like the judging was solid and a worthy ranking of both technical skill and aesthetic style.

I’ve seen milliner friends deservedly place in various contests. I achieved fourth place in 2019 with “The River”, a hand-beaded blue sinamay straw hat in the Mad Hatters’ Society annual contest. (MHS is a Facebook group for hat-makers and hat-lovers.)

And… I’ve also seen some horribly subpar work win accolades in some contests.

For this contest, I’m not worried that the judges will choose a badly made or poorly designed piece. But I also don’t know what to expect. Looking through the entries of previous years, there are always excellent, beautiful hats that don’t place. Not placing doesn’t mean a hat was bad — or even that it couldn’t have deserved to win if a different eye were choosing. So my thought process goes something like this:

I probably won’t win a prize, but that’s okay. I know my work is great! … But maybe I could win. I think my piece is one of the best. It could happen. … Who knows what the judges will like best, though. They could pick something I totally don’t expect. … I should mentally resign myself to a worthy showing with no formal recognition. … But I don’t want to think my piece isn’t good enough. I think it might be. …

In other words, I’m excited and nervous, hopeful and pessimistic. Just the same feelings as waiting for casting when I’ve auditioned for plays and musicals. (They will announce the winners on May 26, with the popular vote decided at the end of June 2 BST.)

When I look at certain other entries, I think “Oh, that’s a great piece. That could win!” And when I look at mine, I think “Wow! I love this piece of wearable art I’ve created! It could win or not. But most importantly, it’s my favorite! It’s the most ‘me.’ The perfect synthesis of my techniques and skills … and my artistic vision.”

So regardless of whether I win, I am utterly and totally in love with my piece. That’s a win. I am so pleased that I made this millinery competition hat and that I can share this beautiful creation with the world.

I have been asked whether I’ll sell it. I think I might offer it for sale, but I haven’t decided for certain yet. And it will take some figuring to price it, since it’s so different from my usual pricing calculations.