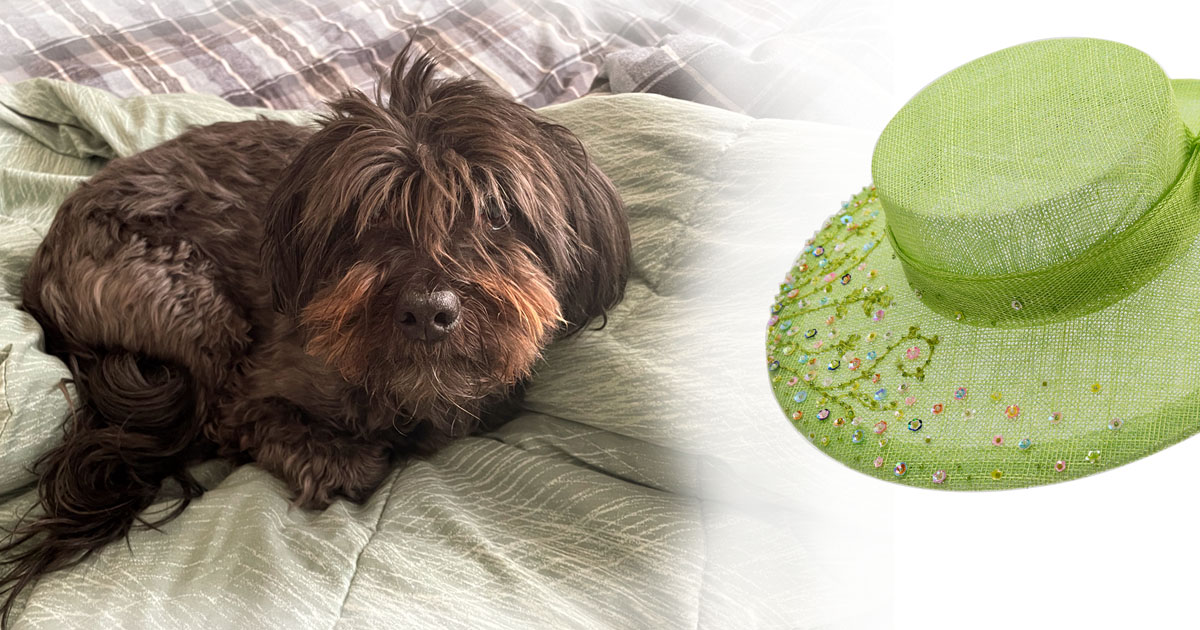 In February, I started making the most delightfully springy, cheeriest straw hat, which my imagination had been nudging me for a while to bring into the world. I laughed as I sewed delicate floral sequins … while huge amounts of snow piled up outside my window! (I shared the juxtaposition in a quick little TikTok video.)

Just a couple weeks later, that idea of happiness and rebirth contrasting with bleak coldness took on a new, more ominous connotation. My beloved dog, Remy, was diagnosed with cancer and wouldn’t live to see the spring or summer.

A brief history: In 2011 — before I discovered millinery — I was suffering from clinical depression and anxiety (and working in a very toxic workplace). I decided I needed a puppy. I took some sort of breed-matching quiz, and Havanese was the clear winner. Small, easy to train, low shedding/allergens and bred to be companion animals!

Remy (named after the rat in Ratatouille) brought joy to my life and gave me a positive activity to focus on. He helped me recover from the dark place I was in. He was silly and sweet and adorable and an epic snuggler.

I could leave ribbons and papers and hat blocks strewn about on the floor, and he never touched them. (Our chocolate lab, who overlapped Remy for 17 months, would have undoubtedly have found them irresistible chewing temptations.)

The extent of “havoc” in my studio from Remy was:

I don’t have the words to convey how much I adored this dog. He was 11, and the breed should live a few years longer on average. On March 16, I got the sense that the end was much sooner than we realized, even though the vet hadn’t said that yet. When I asked how long, she said, “A week. A month if you’re lucky.”

Creativity and the difference between Grief and Depression

Everything seemed to stop in my life. I didn’t clean my house. I didn’t cook. If I could manage to have an appetite, I ate takeout. I gave myself the grace to do only the things I wanted to do and not worry about other things (except gathering tax documents for the accountant!).

As a result, my studio currently looks like a bomb went off.

It turns out that organizing and putting blocks back on their shelves or putting unused trims away after testing them out felt like way too much effort for me emotionally.

In some ways, this is a lot like depression, which (as mentioned above) I have first-hand experience of. When I was depressed, I wasn’t suicidal. But Remy saved me from being catatonic, which is that I literally had no urge or motivation to do anything. I wanted to do nothing. Nothing.

But amidst the pain of knowing that my doggie soulmate was about to die, I still … somehow … wanted to create.

And that is the huge difference between grief and depression. Depression tells you nothing matters, even good stuff isn’t good. Grief tells you everything matters. A lot.

Seeing my dog lose his perkiness and his love of meals was heartbreaking. AND…

AND it made it vital to me to create. To express myself. To bring something happy and pretty into the world. To practice my art form, not to fulfill a customer order and not to predict what would sell, just for my own comfort.

I live in Vermont, where it’s still (today in April) cold and gray. The green grass and flowers don’t come back until well into May. This hat was a way for me to work through my grief — an expression of beauty continuing to exist and green days to come. I call it “The Hope of Spring.”

I also made a leopard-print take on a Homburg hat. Again, I designed it to please my own aesthetic, no one else’s. I used one of my favorite ribbon cockade techniques, the nautilus cockade, and extended it into a pleated band waving its way all around the crown, and echoing the angled cutaway in the crown.

Blocking with felt is also a great way to physically work through some negative emotions! Steaming and pulling on felts over blocks just feels good. (You can see this hat being blocked in this short TikTok video.)

Grief has me feeling like I want to crawl under covers and alternately sleep and cry forever.

Creativity has me feeling like, “There are so many beautiful things yet to be made! Go. Do things. Make happy, pretty hats to be an antidote to sad things in the world.” As I’ve mentioned before, my perspective on hats is that they exist simply to be beautiful and fun. It’s not a world-saving objective — but it is important.

Hats to sell or keep?

As for the two hats, I haven’t decided what to do with them. I might keep them for myself as mementoes and because they are beautiful. But if I find that having them around would be a painful reminder of the end of Remy’s life, then I might sell them. If you are interested in either of them, please feel free to email me: info@silverhillcreative.com.