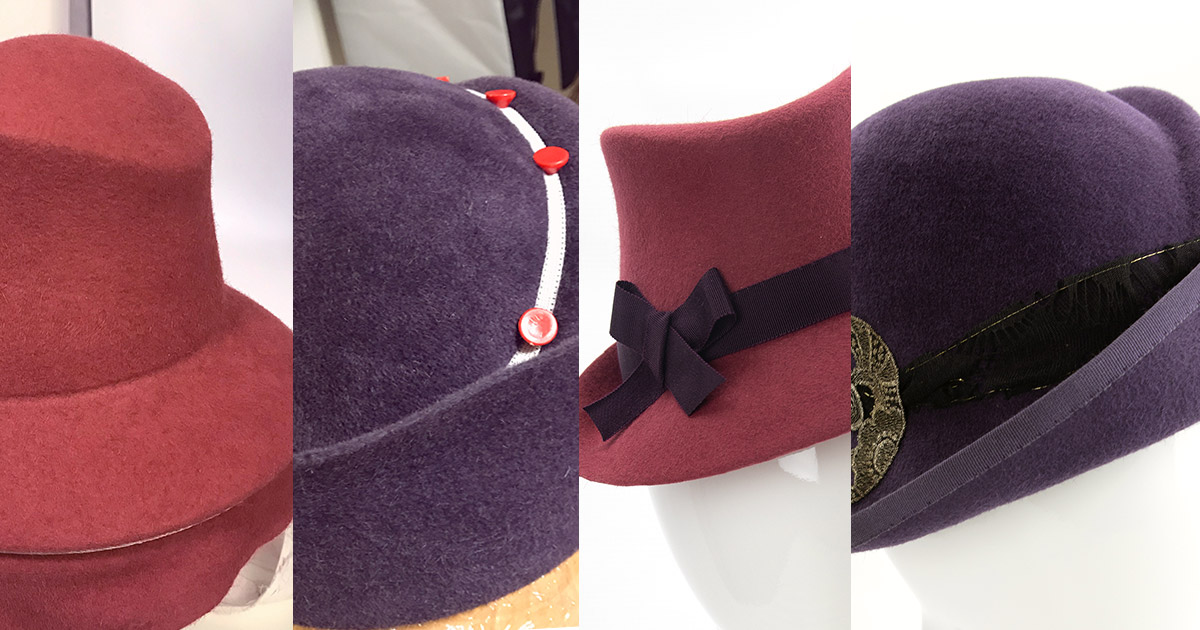 In May 2020, I officially joined the Milliners Guild. I wanted to write about my membership — but I wasn’t sure what to say beyond “Hey, I’ve joined this organization.”

Is it a designation most people care about? No. I’ve never been asked if I’m a member. Probably most U.S. hat-wearers don’t even know it exists. And being a current member isn’t a humongous deal.

But being accepted for membership… That is a big deal. And it’s important to me as someone who creates and sells handmade hats.

There’s an application process that required me to demonstrate proficiency in handmade millinery: making felt hats (as a single piece and as separate brim-and-crown sewn together), making straw hats, “swirling” ribbon, hat lining, etc. Other milliners vet the applicants, so it’s a badge of honor — and recognition from professional colleagues — to be admitted.

Sometimes people call themselves “hat makers” who aren’t actually hat makers. They buy pre-fabricated bases and decorate them in some way. This can run the gamut from a beautiful painting or embroidery on a hat … to a hot glue gun sticking a ribbon and a flower to the crown. In the former cases, the creator would actually be a painter or an embroiderer — not actually a hat maker. In the latter case, that person is a decorator or an assembler.

While I am generally unimpressed with decorators, I keep two things in mind:
1. Decorating hats can be a gateway to genuine millinery! I’ve known of more than one legitimate (and skilled) milliner who started out with dressing up pre-made hats and wanted to take their skills to the next level.
2. It’s a totally fine art form — as long as you’re honest about it.

I will always be honest about what parts I do myself and which I don’t. These can vary from hat to hat. I’ve used vintage embroidered appliqués and have done my own embroidery by hand. I block all my felt shapes by hand myself, but I don’t felt the fibers myself. (Some milliners do, though it usually produces a more rough-hewn look. So you can usually tell just by looking even if the milliner hasn’t said.)

How to Anger a Milliner

I’ve recently joined TikTok to share behind-the-scenes glimpses of my work. And, wouldn’t you know it? My most viewed video so far — by a long shot! — isn’t some cute demonstration of a hat in progress. It’s me without makeup just looking into the camera and complaining about a lying seller at a craft fair.

I wasn’t a seller there, and I don’t consider her my competition. What I do and what she does are very different things. But what I have a big problem with is how she creates false information about what a handmade hat is.

[For some reason, the embed block isn’t working on my blog, so here’s the link to that TikTok video.]

For some background, this was a craft fair in Stowe, Vermont, that has been around for several years. The organizers proudly state that it is a juried show with high-quality original work from the seller’s own hands — no reselling allowed.

And, somewhere along the line, their jury process failed.

There were two vendors who sold felt hats. One deserved to be there; the other was a fraud.

The legitimate one decorates hats with painted designs, as well as sewing fabric hats of polyester fleece. I didn’t have a chance to talk with her. But I have every reason to believe she would be honest that she takes a (pre-existing) plain hat and paints it. Her website seems clear about that.

The fraud has a website where she identifies herself as a “wholesaler” not a hat-maker — and shows about half of the hats as being “imported”! The other half are labeled as made in the U.S., but with no further explanation. Surely if she were making the hats herself, she would say so.

Seeing the booth and hats in person, I could immediately tell they weren’t handmade.

But here she was selling at an arts festival where everything was supposedly handmade!

The average person would be fooled, sadly.

I am not opposed to mass-produced, inexpensive hats. They’re what I used to wear before I became a milliner. If you have only $60 to spend on a felt fedora and you find one you like, go for it!

But I do want you to know what you’re getting.

How a Hat is Made

These steps are in order of where the mass-production would happen. For example, there’s no scenario I know of where a hat-maker would block the hat themselves then have a factory do the other steps. So if you know someone blocked the felt themselves, it’s a reasonable assumption that they finished the edges and attached any decoration themselves.

But how do you know?

I’m going to skip over the first one and do a separate post about the clear visual differences between handmade and mass-produced hats.

Think is just a simple pause to consider whether the volume and price match what would be “handmade.” If you see a stack of 20 identical felt fedoras all priced at $60, that might be a sign that the bulk of the making (or all of it) was done by others.

Ask “What Part of This Did You Make?”

Any artist or handmade seller worth a cent will be honest — and proud — about their contribution to the hat.

I’ve encountered makers who proudly tell me that they took a hat and decorated it by gluing appliqués onto it. That makes me cringe, and I might call it barely handmade — but they’re honest about it. And that’s what matters. It’s then up to you to decide whether you like the look and value the creative contribution.

With Madame Fraud, I said (knowing the answer), “Oh, are all your hats handmade?”

“That depends on what you mean by ‘handmade,'” she replied.

I grabbed an obviously mass-produced fedora and said, “Is this handmade?”

She grabbed a different hat and said, “Oh, this one is handmade.” I noticed she didn’t say she was the one who made it, and she proceeded to distract from the question and talk about how hats are made by stretching felt over wooden forms.

“What about this hat? Did you make this hat?”

She then admitted that a “supplier” had made and provided the hat. Whether she attached the plain band herself she didn’t say, and I didn’t ask.

Asking “Is this handmade?” allows an honest “yes” and an omitted “but not by me.” Or “Did you make this?” allows a “yes” that truthfully means “by attaching trim to a pre-made hat” while allowing the buyer to infer that the seller made every part of it.

Buying pre-made felt hats and decorating them can be a totally legitimate and creative business model. And it does qualify as “handmade.” But those sellers are not milliners or hat-makers.

I am proud to call myself a milliner. My membership in the Milliners Guild is a badge of honor that means I have met a high standard of handmade. I block and finish and decorate my hats 100% by hand.

Using a sewing machine to sew ribbon binding on a brim edge or a head-fitting band inside still totally counts as handmade. Although I usually do these steps by hand, it’s not hand-sewing vs. machine sewing that is the distinction. It’s who is doing it.

Sometimes I use existing embroidered appliqués or silk bands that have been pre-pleated. And I don’t felt the fibers myself. I use unshaped felts. That’s the extent of what I don’t do myself.

Above all, I’m honest about it. I’ll never be trapped by an awkward question because I’m fully transparent.

If I did less of it myself, I could perhaps have lower prices and sell a higher volume — but that wouldn’t satisfy me. I wish I could put into words how much love and pride I put into my work.

I make hats because I love making hats. I love the whole process from beginning to end … and I hope you like the results enough to buy one of my creations.

I was at a craft fair once when a woman said, “Oh, I have a friend who makes hats!”

I’m so accustomed to “makes hats” meaning “a friend who glues decoration onto pre-made bases.” But after just a tiny bit more chatting, I discovered that she was talking about the president of the Milliners Guild!

So, yes, she does make hats!

Join Me on TikTok!

I’m sharing videos of my hats in progress — including footage of my own two hands doing the work — on TikTok! Follow me there. My user name there is @silverhillcreative.