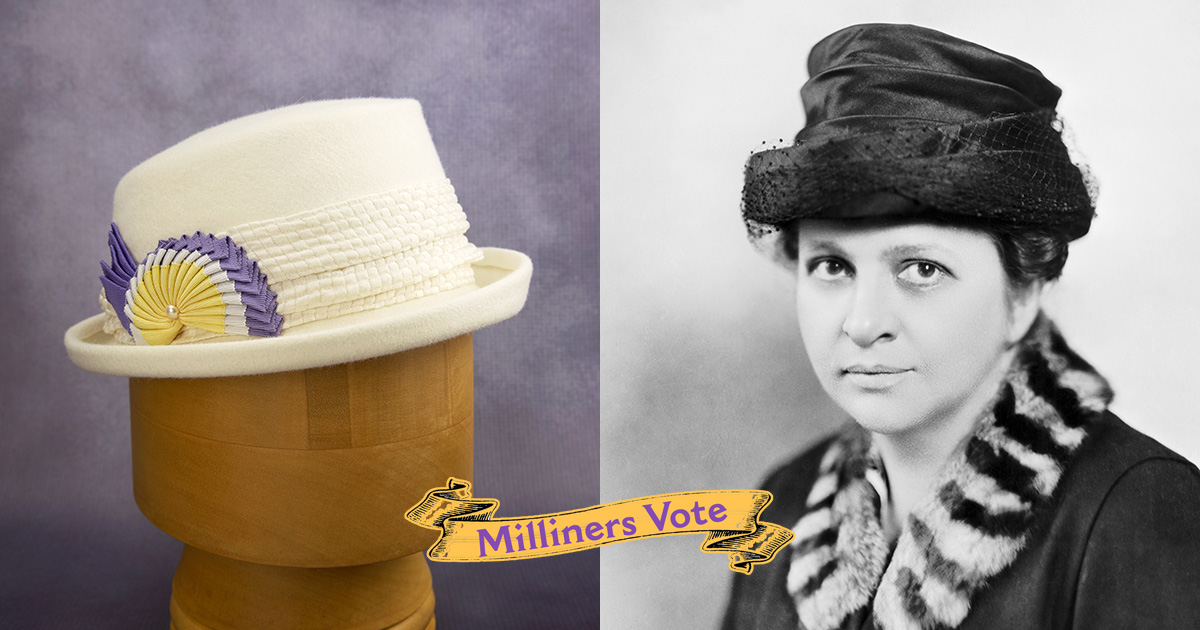 Tomorrow is Election Day in the U.S. To mark the occasion, here’s my post about a hat inspired by U.S. Secretary of Labor Frances Perkins.

Back in May, I joined the Milliners Guild as a professional-level member. (More about that in future posts.) Since COVID was already in full-swing, exhibitions that would otherwise have been in-person events got moved online. First up was “Modern Rituals” where we designed hats with matching face masks for both summer and fall.

When the Guild announced a new exhibit, I wasn’t immediately sure I would participate. It was conceived to mark the 100th anniversary of the 19th Amendment and to be presented in the lead-up to election day.

The design assignment called for a white hat. White was chosen because of its traditional association with the women’s suffrage movement. Did I want to be bound by the restriction of making a white hat?

The other aspect of the brief was: Choose a suffragist to be inspired by, and create a hat for her. It could be a design like one she would wear or a design that highlighted something about her life or career. I knew immediately which woman I wanted to honor:

She was a suffragist, of course, but she is most famous for being the first female cabinet secretary in the U.S., serving as Secretary of Labor under Franklin D. Roosevelt, 1933-1945. I am particularly inspired by her as an example of women’s involvement in politics. I chose her for two reasons: the Triangle Shirtwaist Factory fire and the everyday hats of the 1930s and ’40s.

Many times in my career as a milliner, I’ve thought about the Triangle Shirtwaist Factory fire. It’s a horrific event in history — but one that truly puts things into perspective.

I work from a studio in my home. A place of safety. I don’t have to work for pennies a day or for grueling hours. Even if I were to join a larger millinery label and be an employee, as an American worker in the year 2020, I would be protected by labor and safety regulations that came about in part because of Frances Perkins.

On March 25, 1911, Frances Perkins was having tea with friends in New York City’s Washington Square when the group heard fire engines. Running to the scene of the fire, Frances Perkins witnessed in horror as 47 workers – mostly young women – jumped from the eighth and ninth floors of the building to their deaths on the street below. In all, 146 died as flames engulfed the upper three stories of the building.   The fire at the Triangle Shirtwaist Factory was, she later proclaimed, “the day the New Deal was born.”

From HER LIFE: THE WOMAN BEHIND THE NEW DEAL on the website of the Frances Perkins Center.

My favorite, favorite styles of hats are vintage, everyday hats! Don’t get me wrong; I love a sculptural racewear headpiece or a beaded cocktail hat or a wide-brimmed Edwardian-era hat. But my heart will always belong to casual, everyday hats from when everybody just wore hats. Cloches, fedoras and other felt hats that look a little battered and very lived in. They weren’t costume pieces or fancy accessories. They were part of regular clothing — and irresistibly charming to me.

A Google image search for Frances Perkins shows her wearing a wide variety of hats — from berets and fedoras to even a tricorn hat.

My hat to honor Frances Perkins wasn’t a reproduction of any specific hat that she wore. It was intended to evoke the style and mood of the hats she wore.

Designing a hat for Frances Perkins

I noticed that most of Frances’ hats had narrow brims, regardless of the shape. She also often favored asymmetrical shapes, soft-looking felts and draped fabrics.

I blocked the crown on a wooden hat block with a lovely and subtle asymmetrical shape, forming a ridge at the top of the left side to emphasize the asymmetry and to give it a more hand-shaped look.

The brim was also shaped by hand and turned up all the way around, again like many hats she wore.

I chose a white checked fabric to drape around the crown and add texture.

The design brief for the Milliners Guild exhibit also called for yellow and purple to be incorporated into the trimmings of the overall hat because white, purple and gold (yellow) were the colors of the women’s suffrage movement in the United States.

I chose lavender and yellow so the contrast wouldn’t be so harsh against the pale white.

Because my regular millinery designs draw heavily on vintage styles, I often use cockades. (I’m a wee bit obsessed with them!) Since cockades have so often been used throughout history to mark political causes and activism, it would be silly not to use a cockade on a hat that was literally about honoring the political activism of the 100th anniversary of the 19th Amendment. So, of course, a cockade!

The “Solidarity in Style” exhibit

All the participating milliners photographed hats against a black background and they were presented side-by-side with photos of the chosen suffragist. I love seeing my hat next to a photo of Frances Perkins — but it’s even more powerful to view a list of 25 historical women and the hats they inspired!

Please check out the “Solidarity in Style” online exhibit from the Milliners Guild!