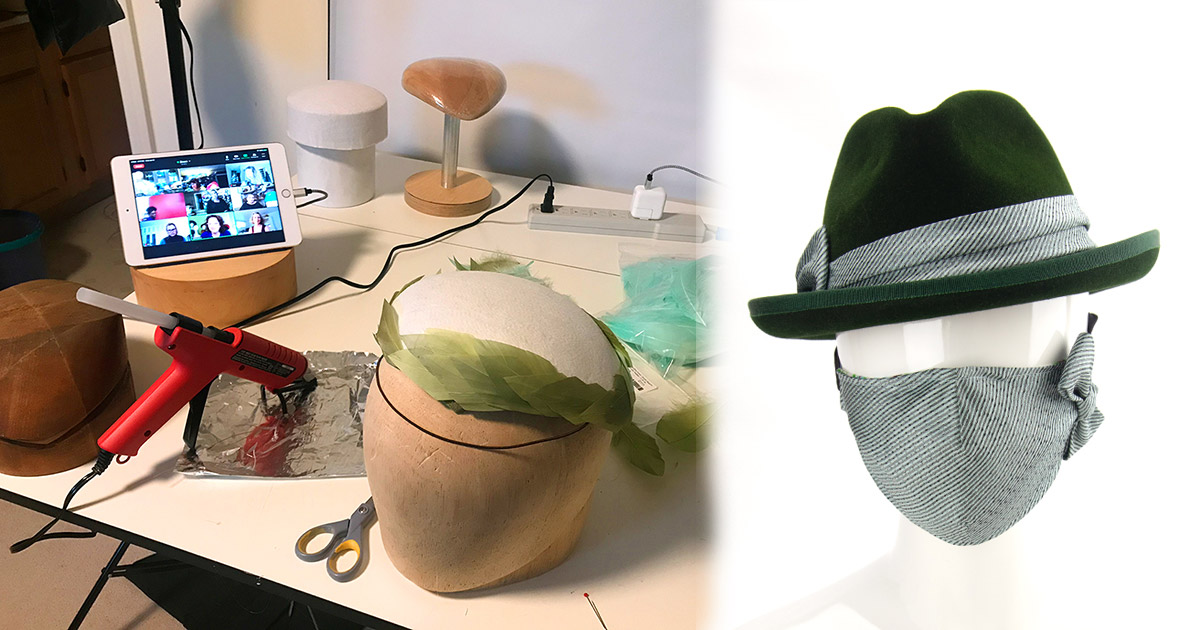 Is the first of February too late to review 2020? With the flurry of craziness that is January, I think February totally counts as the start of 2021. 😉

Even though 2020 was disappointing overall — due to the pandemic, of course — there are some noteworthy things to share.

In the early part of 2020, I registered to once again attend Millinery Meet-Up, which was scheduled to take place in late September. I signed up for classes with five instructors, and I was looking forward to seeing my milliner friends (and favorite vendors) in person!

In late February or early March, the organizers announced that they were keeping an eye on this new pandemic and had a back-up plan to hold the event in March 2021 instead if needed. By late spring, it was obvious that not only would it not happen in September 2020 but that March 2021 was too soon as well. Sure enough, when the organizers announced the postponement, it was put back by a full year, to September 2021. (And now even that date is in doubt.)

But the effects of lockdown forced many milliners to start offering online classes, even before MMU was postponed. I took a variety of classes — from free ones to Hat Academy offerings to special sessions through B Unique Millinery.

Like many classes I’ve taken, they won’t necessarily immediately transform my work. I took a class (above) on creating feather-covered hats and head pieces. It was a fabulous class, and the techniques I learned are very cool. Am I going to start making a whole bunch of feathery hats to replace my usual felt hats? Probably not. But it’s great to have new “tools” in my toolbox.

I Joined the Milliners Guild!

In April, I did something I had wanted to do for a while … I applied to join the Milliners Guild. And in May I was officially accepted as a professional member!

The Milliners Guild is a non-profit association of professional milliners, specializing in handmade traditional headwear. (In other words, no mass-produced hats or handmade knit beanies.) The application process requires proficiency in classic millinery techniques, so joining is worth bragging rights.

With everything going online, the Milliners Guild meetings have all been via Zoom. And exhibits, which might otherwise be in store windows, museums or other physical locations, have launched on the website.

I made matching hat and mask sets for both Spring/Summer and Fall/Winter for the exhibit “Modern Rituals of Fashion and Protection: Mask & Millinery.”

Then in October, I made a white hat in honor of Frances Perkins for “Solidarity in Style,” the Milliners Guild exhibit to honor the suffragist movement. (I wrote more about my design and inspiration in a previous post.)

The first part of the year killed my creative mojo. But I was able to get it back by spring.

One silver lining that seemed to go along with the pandemic was many milliners selling old hat blocks. So I added a nice variety to my stash, including a perching set with bowler and homburg crowns and a Western-style wide brim set. I also got new blocks from both Hat Blocks Australia and Guy Morse-Brown.

I made several custom hats for multiple customers, and developed new ideas for one customer that I might launch to my public offerings soon.

Overall, 2020 wasn’t the greatest year for me as a milliner, but I learned new things and kept on creating — and those are the most important things.